Everyone loves their pets, so we wanted to do something fun and a little different here at The Shippers Group for National Pet Day! In March, we announced to all our associates that we would be holding a contest on Facebook for the upcoming Pet Day. Associates were encouraged to send in a photo of their pets to be part of the contest. All pets were welcome to participate. While we were not surprised to receive many entries consisting of dogs and cats, we were intrigued with entries that included pets like a horse, bearded dragon, and even a raccoon named ‘George Coonie’!

Once all entries were received on Friday, April 3rd, the contest went live on Facebook. All of the pets submitted were uploaded to our Facebook page, and every 'like' on the photo counted as a vote. By the end of the contest, the photo with the most likes would be featured as our National Pet Day post, and the winner would also receive a gift card.

The cutoff time for the contest was April 8th, and to our surprise, two of our contestants took it down to the last second - literally! When the cutoff time hit, Louie the dog was up by one vote with 123 votes. However, 30 seconds later with a time stamp still of 8:00, Charlie the cat had taken the lead by one with 124 votes! Because this was such a close race, and the winner could go either way, we decided to make both Louie and Charlie our winners. 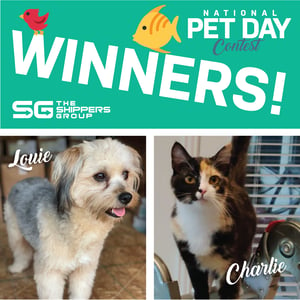 Congratulations to the pet owners, Glenda Hernandez (Louie) out of our Wilmer, TX facility and Ken Linex (Charlie) out of our Wintergreen, TX facility! As seen in the National Pet Day graphic, both pets were featured in our post and both owners received a gift card of the same original value.

We had such a fun time seeing all the entries and watching the contest unfold! Thank you to our associates and to their friends and family for liking and sharing our contest to make it a success.

If you missed our contest, be sure to go to our Facebook page to see all the cute contestants we had!

Learn more about The Shippers Group's locations and services by clicking here.