Why Warehouse Wages are Up and Workers in Short Supply

Prior to the Pandemic

Wages in the supply chain industry are increasing at the fastest pace seen in years in response to a shortage of labor. Prior to the pandemic, warehousing and distribution providers were already struggling from a labor market that was close to full employment, especially in high density distribution markets such as Atlanta and Dallas.

Compared to other industries, record job losses during the pandemic did not impact the supply chain industry as workers are considered essential to the movement of food, consumer packaged goods, and healthcare. However, today’s labor shortage in the warehousing industry is worse while the unemployment rate sits at 5.4%, with over 1 million more job openings (across all industries) than people looking for work at every skill and salary level.

Pandemic era stimulus money provided a means for some workers to stay home, but as states did away with the funding, we have not seen a rebound in workers returning to jobs. Prior to the pandemic, the warehousing industry was already seeing an uptick in turnover rates as warehouse workers jumped from job-to-job in search of higher wages. 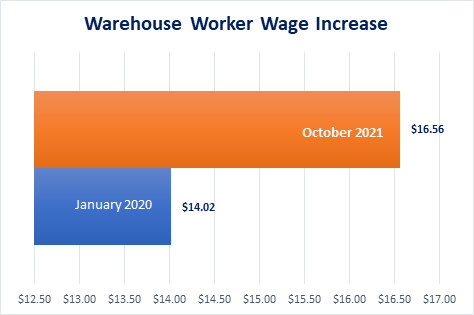 Warehousing companies have had to raise wages as a means of attracting and retaining workers. Since January 2020, industry wages have increased an average 18% for forklift drivers and materials handlers. As wages for new hires have increased, so has the need to increase wages to retain tenured employees.

In January of 2020, the base average starting wage of warehouse workers was $14.02/hour. As of today, the average starting wage is $16.56/hour. Not only are workers today expecting a higher wage, workers are also demanding better working conditions. As a result, organized union activity in distribution centers is on the rise after decades of decline.

This pace of wage increases takes a bite out of profitability in addition to the rising operating costs of equipment, fuel, and supplies. To help offset the massive increases in labor and other operating expenses, 3PL warehousing providers are aggressively looking for ways to improve productivity but have also been forced to increase warehouse handling rates to customers.

Where as the costs of equipment and supplies tends to go up and down, the cost of labor remains on the books. Compared to when labor was abundant and less expensive, now distribution providers like The Shippers Group are using automation for many warehouse functions such as sorting, picking and packing.

Forecasters predict this trend to be around for a while and a contributing factor for ongoing disruption in the supply chain and rising inflation. In addition to managing the wage pressure, The Shippers Group is thinking outside the box for better ways to recruit and retain associates in an employee leveraged market. Today’s workers expect more flexibility and want to see how their contributions directly impact the company. Even among lower skill level associates, many are interested in knowing a career path and what personal growth opportunities are included in their employment.

The Shippers Group is a leading national third-party logistics company headquartered in Dallas, Texas with distribution facilities in Texas, Georgia, California, Illinois, Florida, and Virginia totaling 16 locations and over 6.5 million square feet of space. To learn more about our areas of expertise, visit our Services page.